Yemi Eberechi Alade, is popularly known as Yemi Alade. She is a Nigerian Afro pop artiste and also a songwriter.

She is good at her music career and has won the Peak Talent Show back in 2009, and in 2014 she ruled Nigeria music industry with her hit single called “Johnny”.

In case you weren’t aware, her father was a reputable police commissioner in a Yoruba state in Nigeria, while her mother comes from an Igbo descent.

Recently, she was caught up in a debate with a fellow celebrity, a South African actually.

The debate was between her and Cassper Nyovest.

The Debate centered on which gender was more Stubborn, either the male and the female folks?. Yemi Alade claimed that the male is known to be more stubborn than the female while Cassper thinks the award for stubbornness should be reserved for the women.

However it seemed like the debate was hitting up, then, Cassper Nyovest had to bow out, according to him in order to protect his brand, because he will not want to do anything to end his brand.

Check out few of the tweets below; 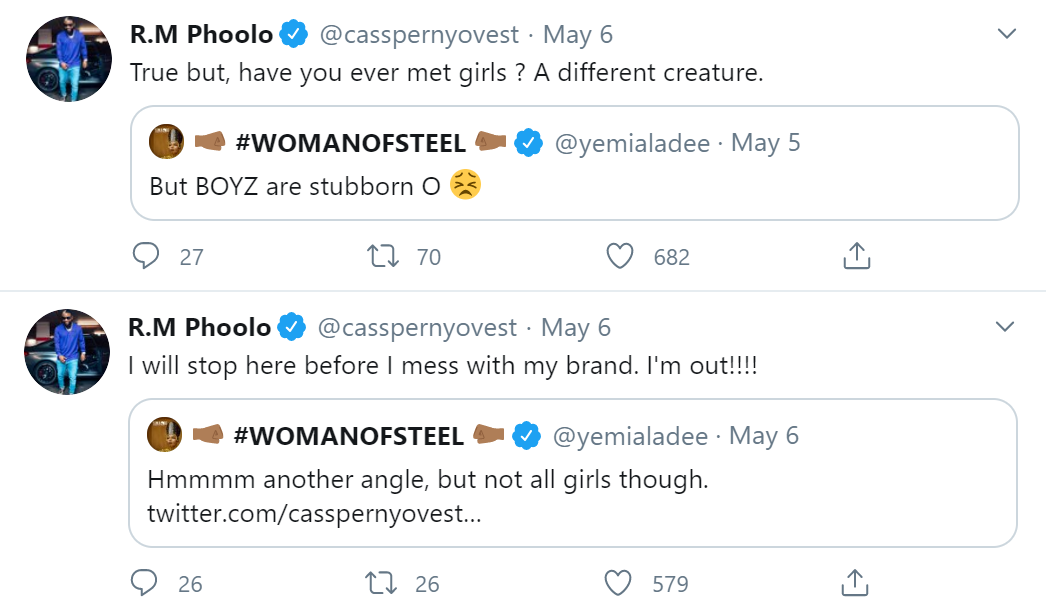 In another related news, Cassper Nyovest affirmed to his followers that he is still a full time independent artiste and will not be under any record label.

This came up after a fan made a comment about his past project “Thuto”, the fan claimed that the album was his best  because he then was an independent singer when he dropped it. Mufasa immediately cleared up the air and told the fan to slow his rolls, that he not yet under any label, he is an independent singer.